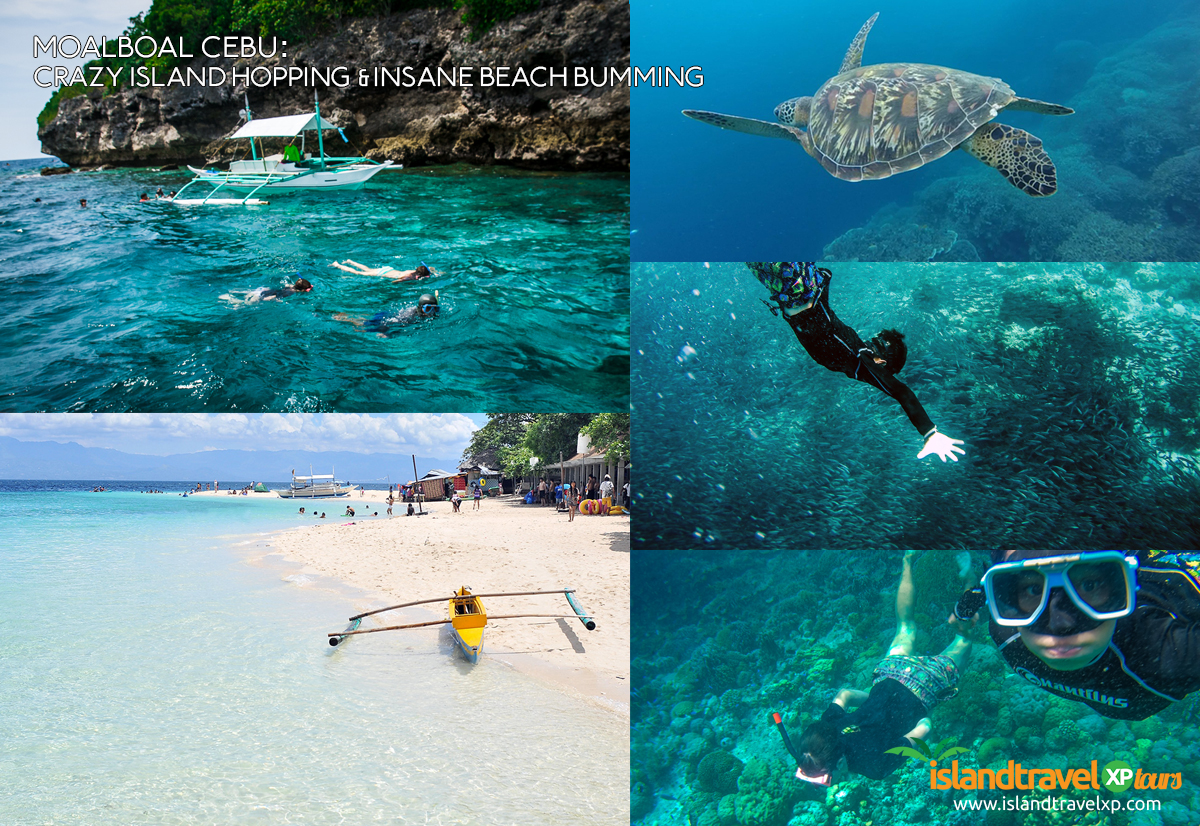 Cebu never ceases to amaze everyone. From the province’s breathtaking north uphill attractions to its astounding southern delights, Cebu is more than just a paradise on earth. One of the most visited places in Cebu is the town of Moalboal; a municipality known for its pristine and marine-rich biodiversity. The town of Moalboal is an extending peninsula on the south-western tip of Cebu overlooking the majestic Tañon Strait to the west.

The municipality of Moalboal offers some of the best dive sites in the province of Cebu and even across the Philippines. The town has world-class recreational diving spots that are truly exceptional. Its most popular dive site is the Pescador Island which has an underwater cave called the “Cathedral”. But there are more things to do in Moalboal.

Aside from the Pescador Island, Moalboal’s most famous tour packages include the remarkable Sardine Run, Turtle Point, and the Basdaku White Beach. These amazing attractions and adventures in Moalboal are a pure gem for travelers!

Some worthy tips before your island hopping: You need to register first at the local Tourism Information Office (at Moalboal’s Municipal Hall at the town proper) and have a 15 to 20-minute orientation before you can proceed.

Highlights That You Can Enjoy in Moalboal

The Pescador Island is a marine park situated on the Tañon Strait, about 2km southwest from the nearest shore of the mainland town of Moalboal. The island reef’s underwater feature has a sandy slope covered with soft coral reaching 5 to 10 meters, followed by a wall covered with hard corals dropping down to about 40 meters. The western side of the island can be found an open-top underwater cave dubbed as the “Cathedral”.

The rich marine life of Pescador Island charms divers from all over the country and the world. Moreover, believe it or not, the island attracts an unusual huge school of sardines which made the warm waters of the reef as their home. This phenomenon just gives Pescador Island hoppers the best time to enjoy nature.

Aside from the abundance of marine life, Pescador Island has a very colorful array of coral gardens below its pristine blue waters. The island’s water is also conducive for snorkeling, swimming, and other water activities.

The surrounding water of Pescador Island and nearby Panagsama Beach (some 300-400 meters away from the turtle site) are perfect homes for more than a million sardines which you can swim along with. The huge school of sardines is a fluttering sight to behold! The majestic shoals of fish move synchronously as if they are being led by a gentle invisible force while you admire their movements.

According to the locals, the sardines left the island after the earthquake in February 2012 which extremely affected the population of larger predatory fish. In early 2013, the fish came back, as well as the larger fish (such as tuna, dolphins, and jack fish).

More interestingly, unlike any other location in the Philippines where you can experience sardines run only during rainy season, Moalboal have it everyday.

Swim with the turtles

By snorkeling or scuba diving in Panagsama Beach in Brgy. Basdiot in mainland Moalboal (a white sand beach resort overlooking the Tañon Strait and the Pescador Island), you can spot or swim with different species of sea turtles along the shore. The Panagsama Beach is a haven for scuba diving enthusiasts with its rich marine biodiversity where each section has its own unique settings and sightings.

Moalboal has one of the cheapest dive rates around the country where you are assured to see diverse marine creatures in a single location. Aside from the fact that you could swim with turtles and sardines, you have also the best chance to spot occasional whale sharks, dolphins, and thresher sharks.

However, turtle sighting is not guaranteed during a bad weather.

The Basdaku White Beach in Moalboal is a kilometer stretch of white sandy beach with immaculately crystal clear blue waters. This public beach offers a great reprieve from the fast-paced lifestyle of the city. Here, you can have great water adventures (such as snorkeling, kayaking, scuba diving, kite surfing, beach volleyball, surf fishing, and so much more) where you can rent out gears nearby.

There are accommodations, dive centers (managed by both locals and foreign operators), and eating areas (mostly Karinderias) located near the beachfront of the Basdaku White Beach. Most of the dive centers offer basic diving courses, PADI open water course, instructor course, free diving, and other courses with certificate given if you finished such course.

How to go to Moalboal, Cebu

Via private transfer: This is the quickest and most convenient way to reach Moalboal. There are various tour operators that could bring you, your family, and your friends conveniently to Moalboal. One of these organized tours includes the IslandTravelXP Tours based in Cebu City, which offers pick up and drop off from any point in Cebu.

Via taxi: Taxis are available in Cebu City and at the airport where there are no fixed rates. The drop off point is at Panagsama Beach. If you have specific accommodations, tricycles are available around the area.

Via bus: If you are coming from Cebu City, there are public buses from the South Bus Terminal. Take a bus ride going to “Bato via Barili”. Tell the driver that you will be alighting in Gaisano Grand Mall or the Moalboal Municipal Hall (travel time takes 3 hours). From here, you can take a tricycle ride or a habal-habal to your hotel or you want to go straight to Panagsama Beach. The beach is just 15 minutes away from Moalboal town proper.

Where to stay in Moalboal

There are two main beaches in Moalboal: the Panagsama Beach and Basdaku White Beach. There’s a lot of budgets, mid-range, high-end hotels, and BnBs in either of the beaches. You can book online via Agoda or you can contact IslandTravelXP Tours for a more convenient travel and stay with undisturbed adventure in Moalboal.

Currently, tents are not allowed in both beaches because of previous events concerning environmental abuse by some unscrupulous travelers who tried to dig into the sandbar to hide their trash.[/vc_column_text][/vc_column][/vc_row]